One of the common stumbling blocks we see holding salespeople back is self-limiting beliefs that prevent them from moving the sales conversation forward, moving an opportunity to the next step, or asking the kind of tough, timely questions that can stop a prospect in their tracks and think "Wow, I've never thought of it that way before."  And if your sales managers are not aware of these self-limiting beliefs - and the impact they can have on their salespeople - their coaching effectiveness will be significantly slower.

While we can empirically measure 64 specific self-limiting beliefs when we evaluate a sales team, there's probably over a hundred of these beliefs that we regularly observe in salespeople, and as we coach sales leaders to coach their salespeople. In your next coaching conversation with a member of your sales team, listen for signs of some of these beliefs. Here’s a few examples: 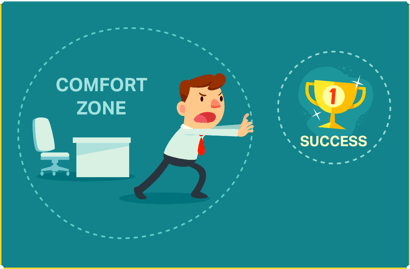 asking about the budget they have to invest in solving a problem. They're uncomfortable quantifying the impact of a challenge that the prospect is experiencing because of their current situation that the salesperson could potentially solve. Something you can ask about when you're coaching your team is how your salespeople uncover the budget. If the salesperson says, “Well, we didn't talk about budget” then you have to figure out why they didn’t bring it up. It could be that they simply didn't recognize that that's where they were in the sales process, or it could be that they were uncomfortable. If they just didn't know, that's a relatively straight forward coaching opportunity. If it's a conceptual issue and they just weren't sure how to go about bringing up the budget, that gets to be more challenging. That takes a little bit more development. Something you can ask as a coach is, “When you knew it was time to talk about money and you didn't want to, what were you feeling?” Usually what you hear is, “I started to feel uneasy.” In this situation you want to coach them on is taking a breath, grounding themselves, and confidently giving the prospect a budget range.

Another common self-limiting belief that we observe in some salespeople is having a negative perception of their profession. When some people think about sales, the first word that pops into their mind is usually pushy, sleazy, aggressive, slick – lots of negative adjectives. The problem with this is that if your salesperson has self-limiting belief about their profession, it's going to inhibit their ability to do their job. What we like to tell salespeople is don't think of yourself as a salesperson, reframe it to think of yourself as a helpful problem solver. When you have the mindset of a helpful problem solver, you're asking questions not to push your product or trick the prospect into buying your solution. You're asking questions to find out more about the problem you can solve. Make sure you can solve it, make sure it's the right kind of problem. If it's not, you can still be helpful by giving them another suggestion and pointing them in a different direction. You'll actually earn credibility by directing them elsewhere if you're not a good fit for them. If you have a servant mindset, that's going to make the job a lot easier.

The last self-limiting belief we will cover in this article is the fear of cold calls. This is really prevalent in sales. A lot of bloggers and social media experts have talked about how cold calls are dead, and how social media, inbound marketing, and content driven email campaigns are going to basically destroy the need for cold calls. The truth is, cold calls are alive and well and will be for a long time, yet we see sales people get paralyzed with fear and the phone weighs 10,000 pounds when they have to pick it up. One of the things you can do to combat this is scheduled time with yourself to make calls. Block out 30 to 60 minutes on your calendar and treat it like an appointment. Make sure you change up the day and time you do cold calls every once in a while as well, that way you might catch someone at just the right time. Another thing you can do to combat a fear of cold calls reframing how you think of rejection. Instead of looking at it as a rejection, look at it as a projection. When you start tracking rejections as a positive progress toward your goal rather than a negative, you start to look forward to that rejection because it gets you one step closer to a conversation that's going to go somewhere.

There are hundreds of self-limiting beliefs in sales, these are just a few examples. Hopefully this gives you a framework of what to look for and how to coach through them. If you’d like more guidance, you can subscribe to an online course designed specifically to address self-limiting beliefs by going to https://learn.objectivemanagement.com/courses/salesmind?ref=220.  And you can always contact us at http://www.intelligentconversations.com/ or visit us on Facebook.

Want to read more about self limiting beliefs? Check out this great article below:
https://inlpcenter.org/five-step-process-for-releasing-limiting-beliefs/