A few weeks ago I was flying across the country, and was able to watch the Oscar-winning film Free Solo. Watching it in an IMAX theater would have been a lot cooler than on a four by four screen on a Delta airplane, but I enjoyed the movie nonetheless. There were two awesome sales lessons hidden in the film, and in no particular order, I'll share them here.

The whole movie is centered around Alex Honnold and his desire to “free solo”, or climb without ropes, El Capitan in Yosemite Valley. El Capitan is probably the most famous rock wall in the world, and it had never been free soloed. The thought of free soloing El Cap is truly insane. It's a monumental accomplishment. After he climbed it, somebody on the film crew asked him, "Well, what are you going to go do next?" And he just said, "Well, I'll probably go do some hang boarding." He'd been working toward this goal for years and years, thinking about it, staging it, doing similar climbs, trying to prepare for it mentally, overco 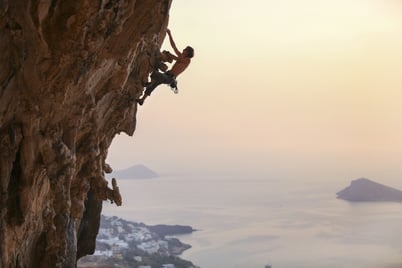 ming all of the fears and doubts that he had, and then after this pinnacle achievement what does he go do? He goes back to fundamentals. The sales lesson here is you can win the big deal, you can close the big sale, you can get the biggest sale in company history and just be humble and go back to the fundamentals.

The best time to make a cold call is immediately after closing the big deal.  Go make some cold calls. Go practice your next pitch. Go think about other questions you can ask. Let that momentum of a big goal accomplished be a slingshot to carry you toward your next goal rather than an opportunity to rest on your laurels. Don't rest on your laurels!  Accomplish something and then think, what can I do next? Go back to the fundamentals.

As Honnold was going through his prep work to do that ascent of El Cap, he went through and rehearsed key sections. There were four or five critical sections that he wanted to dial in on and really practice every single move he was going to make. He did this with a rope so that when he was without a rope, when it was showtime so to speak, the muscle memory would kick in and he would be able to climb without hesitation. There was one particular stretch called 'the boulder problem' where he had two options: He could either leap from one tenuous ledge and grab onto another more substantial ledge, but he'd be totally out of contact with the wall, or he could do what he calls the karate kick, which is a little bit more complicated, but he would stay in contact with the wall. He went back and forth between these two moves, really thought it through and decided to do the karate kick.

The lesson we can take learn here from a sales perspective is how much time is your sales team using to prepare for a phone call, meeting, sales pitch, etc.? Are they really thinking through every option, looking at it from every angle, and thinking through who's going to be in the room? Who's going to be on that call? What are their primary objectives? What are their concerns about our product or service? You have to go in the sales call, just like Honnold had to go on the climb, prepared and able to react well in the moment.

There's probably no better example of being in the moment than when Honnold is free soloing, but that relentless preparation and rehearsal made it possible for him to just glide through the climb without hesitation. So, a few valuable lessons from Alex Honnold's successful free solo of El Capitan are: Don't rest on your laurels, and relentless preparation will help your team perform well when the moment comes.

As a sales leader, how are you enabling your sales team to 'free solo' on their cold calls or in the field? Are you tracking whether your top performers are resting on their laurels after a big win, or if they're using that momentum to exceed their targets? Next Tuesday, June 25th we're going to have a live Webinar on Sales Enablement Mistakes and How to Avoid Them. To join us in conversation on Sales Enablement best practices, click HERE TO REGISTER.