One of the barriers sales leaders encounter when trying to establish a consistent coaching rhythm with each salesperson on their team is they have not established a healthy coaching environment.  What does that mean? There are several components that go into creating an atmosphere that is conducive to coaching.

1. Mutual Respect.  First, there has to be a certain level of mutual respect. The salespeople have to respect the sales leader, or they won't listen to the advice or coaching they get. The s 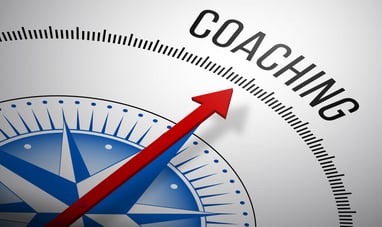 ales leader needs to feel like their advice is being followed and that they're respected, so there's a healthy coaching relationship. The manager needs to earn it, and the salespeople need to give it, but if in its absence, the coaching experience is going to be negatively impacted. If the sales leader doesn't feel like he or she has that respect, their coaching will be more tentative and less effective.

2.  Trust.  What's the level of trust across your sales team? Do your sales people feel like they can share everything with the sales leader and really come to them when they need help? Does the sales leader feel like he or she is trusted by the sales people? Part of a sales leader's job is creating a culture of accountability, managing agreements, and making sure that they hit their numbers, but when a sales person is struggling, do they really feel safe? Do they feel they can go to their manager when they're behind on their plan or not moving deals forward (or do they hide and hope nobody notices)?

The irony in this is when a salesperson's pipeline is stalled that's when they need coaching the most, yet it's also when they're least likely to ask for help if they don't trust their manager.  One of the ways a sales manager can establish trust is to take the time to get to know each individual on their team at a personal level.  The sales coach/salesperson relationship should go beyond a conversation about metrics and pipeline movement.  Your sales managers don't have to know everything about a salesperson’s personal life, but should have a general understanding of where each salesperson on their team is in their career, what their career goals are, and what their personal goals are, what's important to them, etc.  When sales managers take the time to show they care about and take an interest in each individual (beyond the numbers) salespeople are more likely to ask for help when they need it.

3.  Coachability.  Another element is how "coachable" are your sales people? If you hire salespeople who feel like they have nothing to learn because they already know everything, their willingness to implement whatever suggestions your sales manager makes will be pretty limited. Of course, that's going to be frustrating for the sales leader when they have good ideas and they're ignored. Having a team that's open to input and willing to try a suggestion even if they disagree with it is an important aspect to the coaching environment as well.  Ask questions about growth goals, what they're working on, and where they want to improve during your interview process to make sure you're hiring "coachable" salespeople.

4.  Time Coaching.  One of the biggest factors that a manager absolutely can control is the amount of time spent on coaching. We recommend about 50% of a manager's time should be spent coaching their sales people. Some of that will be in formal, structured, weekly conversations where you go through their pipeline, review their calendar, look at upcoming calls, and debrief on calls that have recently occurred. The focus should be on making incremental progress each week with each sales person, giving them that coaching. The other part of that comes from informal coaching conversations that happen throughout the week.  When a manager spends about half of their time coaching their team and being there for them, they create a really strong coaching environment.  Most sales managers say they coach all the time, but in reality they are pulled in other directions and when they do finally sit down with a salesperson the meeting agenda defaults to a pipeline review conversation focusing on what can close right now instead instead of on mid-to-long-term development objectives.

5. It's Not All About the Sales Manager.  Finally, it's not all about the sales manager. Being a sales manager is really about having a servant mindset.  They are their to help each salesperson on the team succeed. It's a bit hard if your sales manager used to be the "alpha” sales person who loves getting the win and celebrating their victories. It's difficult for that type of person to take a backseat role.  What often happens is that type of sales manager simply functions as a more productive salesperson by using their team to extend their reach and set up closing conversations.  The salespeople line up closable deals and the sales manager swoops in and mows them down.  This can be productive in the short term but ultimately limits growth as high-potential salespeople get frustrated and leave, and the ones who stay never learn how to close.

Make sure your sales manager has the right mindset and remembers it's NOT about them, it's all about helping the team win. When they do that, they'll create a strong, healthy coaching environment rooted in trust.

As a reflection, think about your sales managers and the relationships they have with their salespeople.  How strong is your coaching environment?  In which of these five areas do they need to improve?  In your next conversation with a sales leader, ask them, "When you ask a sales person to come into your office, is their reaction, 'Oh boy, what have I done? I'm in trouble,' or is it, 'Oh great, he's going to help me.'"  The answer to that question will tell you all you need to know about your coaching environment.